I Can't Get No...Satisfaction (Natasha Sinel)

You know those promises you make to whichever higher power you believe in (or to yourself if you don’t believe)? You know what I mean. Promises like:

I am beyond happy that my debut YA novel is releasing this September. I am thrilled that I am working with an agent who I know is on my side, with an editor who thinks my book is important. I am thankful for the new author friends I’ve made during this crazy debut year, and for the support of all of my friends and family. And yes, it does change my life in so many amazingly positive ways. But satisfied? Can any writer truly be satisfied? 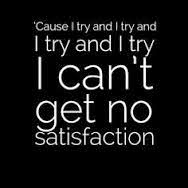 I’m sure you know where I’m going with this. There is no satisfaction for writers. Not really. Because, in my mind, satisfaction is synonymous with contentment. And if I’m content, then I’m not angsty enough, not feeling the torture of creativity that’s in me and needs to come out. If I could be satisfied, then I wouldn’t be able to dive into my characters quite so deeply to figure out why they do the crazy shit they do, what promises they make to their higher power: I’d be satisfied if I could just…

If we writers were satisfied, we might not be able to take the germ of an idea and let it grow and twist and turn and crash and burn and then grow again and flourish the way we do.

If we were satisfied, we wouldn’t feel the need to open our arms wide and throw our heads back and say, “Here we are, agents, editors, readers. Give us your best shot. Love us, hate us, knock us down. But we’re going to keep writing either way because we can’t not.”

If we were satisfied, we wouldn’t need to strive for more and more and more, reaching for that unexplainable something that we know must exist but we just can’t quite reach…yet. But if we did reach it, then what?

Then we probably wouldn’t be writers. Right?

Natasha Sinel writes YA fiction from her home on a dirt road in Northern Westchester, NY. She drives her kids around all afternoon, but in her head, she's still in high school, and hopes that no one near her can read minds. Her debut YA novel THE FIX will be out from Sky Pony Press on September 1, 2015.

Posted by Natasha Sinel at 4:00 AM